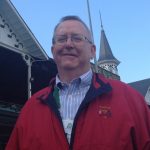 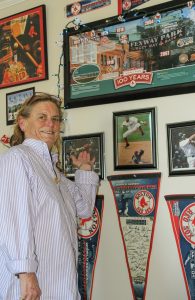 It’s pretty obvious what a big Red Sox fan Maureen is. The earrings featuring the iconic “hanging Sox’’ dangling from her ears are an easy give-away.

Her love of the Red Sox can be traced to her childhood, “being in a house with a father who had two TVs — one with the Bruins, one with the Sox — and listening to the BC football game on the radio, reading the sports page,’’ said Maureen.

She is such a dedicated fan that she actually thought this year’s team was going to make the playoffs, even when it became obvious in September that wasn’t going to happen.

This disappointing season didn’t damper her disposition. Staff, support workers and volunteers at Father Bill’s always noticed what an upbeat person she was.

That’s despite the difficult circumstances that brought her there.

“I was renting a place. I was on disability, I had two part-time jobs, one taking care of child and one taking care of an elderly man,’’ she said. “The elderly man passed away, the child was getting older and didn’t really want a babysitter. So, I lost both those jobs and couldn’t find anything quick enough to pay the rent, which was over what I got in disability.”

At one point, she couldn’t afford the car anymore and lived outside near Scituate Harbor. “On my beach chair between two pine trees next to the fisherman’s pier,’’ she said.

As the weather turned cold, she needed shelter and that’s when she started staying at Father Bill’s Place in Quincy. It was very difficult for Maureen to adjust to a shelter setting, which included sleeping in a bunk bed and sharing space with dozens of other women.

She adjusted and started to volunteer to work around the shelter. “I took it on myself to start cleaning, work in the kitchen,’’ she said. She aggressively looked for housing and was approved for a state voucher.

It wasn’t easy, but it paid off. A friend from the beach at Scituate connected her to a possible residence in her hometown of Scituate. But she didn’t have the $5,400 needed to cover first and last month’s rent plus the security deposit.

That’s when FBMS stepped in to help cover the costs.

“It’s amazing,” she said. “I always wanted a little white house with a white picket fence and to be right on the beach, and here I am.”

At the same time, she’s now working in the kitchen at Father Bill’s. “I like it here,’’ she said. “I have people who I still want to see. It’s OK. I have fun … and I love to cook.

“One Sunday, I was in here cooking. Someone said, ‘Aren’t you pissed that you’re in there all day?’ I said, ‘If I was at my own place, this is exactly what I’d be doing, standing in the kitchen, cooking, watching the Red Sox game. So, yeah, it’s OK with me.’’

There is no TV in her apartment in Scituate yet but there will be when spring arrives. Just in time for Red Sox opening day.

A Career of Caring 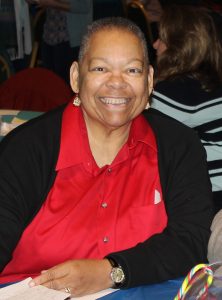 To Lu’ckett Stone-Riley, what she does for a living comes naturally. You could say her career as a triage worker at Father Bill’s Place in Quincy is her destiny.

“Having gone to many different homes myself with different families in different states, in different schools. I think it’s why I’m doing work in this field, that maybe that’s what spurs me on,’’ she said. “I want to help people find that home.’’

Lu’ckett, a self-described analytical person, takes time to consider what she’s going to say and then speaks in a soft voice but one that obviously has great confidence in what she’s trying to accomplish.

In her early 20s, Lu’ckett was briefly homeless, but was undeterred. She was attending Northeastern University full-time, studying psychology and working at a DMH shelter in Boston while staying at a shelter herself.

This was during the deinstitutionalization period in America. For those of you who do not know of that period, the state of Massachusetts had decided that many long term hospitalized patients would be released. Many went to homes but did not have enough services to show them how to maintain themselves in their units, so they ended up on the streets and shelters.

Lu’ckett was able to find her way out of homelessness and she holds a fervent belief that others can, too.

“I think that’s part of why I’m in this field, because I know they can, in fact, find a place to live if they keep their focus,’’ she said. “I always tell my people, keep that focus. There are distractions in here, but keep your focus, you can do it.’’

Father Bill’s Place is an emergency shelter in Quincy with a focus on finding permanent housing. Lu’ckett works with the guests to reach that goal. She’s had a lot of success.

“I started out (working) in housing, then moved to the shelter because I love the challenge, the adventure that may come through the door and the unexpected reward with the guest,’’ she said. “There were about 32 ‘long-stayers’ and part of my job was to get to know them, develop a relationship with them to get them ready to move on. They had been here so long that this was home. Of that number, one died of an overdose, two disappeared, and the rest were housed, the last  in December 2019.

“I remember telling people who had been here for years, ‘It’s time for you to go.’ And (I’d) say it with a smile. That’s how I approach it. I used humor,” she said.

Her strategy is straightforward. “Meeting the client, figure out where they’re coming from,’’ she said. “Start getting documentation together because everywhere they go, they’re going to need documentation to show they are who they say they are. Make sure they have a source of income and start planning toward a housing situation.’’

It’s not easily done, however, and there can be many frustrating situations. Lu’ckett deals with it by getting away by herself and camping. “I do a lot of going out in the woods and thinking,’’ she said.

Refreshed, she can return to her job at Father Bill’s.

“It feels like this is what I was supposed to be doing,’’ she said. “I’ve been in higher levels of human and social services jobs; but I always come back to this. I enjoy doing it, I do my best in this environment and I feel a sense of accomplishment.’’